Drive a Snowmobile across Europe’s most Northerly Peninsula

The Nordkyn peninsula, the most northerly point in mainland Europe, could have been made for snowmobile trips, whether in the darkness of the Blue season or the lighter days of late winter. You can choose between a beginner’s excursion of 90 minutes, or splash out on an expedition right across Finnmark.

The Nordkyn peninsula is the most northerly point in mainland Europe, and has a slightly isolated location on the Finnmark coast. That’s exactly where you should head for if you want to drive a snowmobile, whether you come for a Northern Lights safari in the long Polar Night, or at Easter when you can experience the white plains and wide horizons.

The Nordkyn peninsula could have been made for snowmobile trips. Frozen lakes, plains and gentle hilltops mean that beginners have an easy start. More advanced riders get a chance to turn up the throttle.

If you come to Nordkyn on a winter’s evening, you’re in the right place to see the Northern Lights. The only places to have electric lighting are the compact fishing villages, so everywhere else there is utter darkness, and every glimpse of the Northern Lights will be beautifully clear. Until early March, when the evenings start getting lighter, a snowmobile trip to Mehamn provides the best opportunities of seeing the Northern Lights.

Sometime in November or December, the snow coverage becomes deep enough for snowmobile trips. By then, the winter darkness has descended on the Finnmark coast, and you drive the snowmobiles in the pitch black. In March, by contrast, the light has returned and you set off in a glassy blue twilight. Then the Nordkyn landscape starts to open up around you with its undulating plains and wide horizons, steep coastal cliffs and endless sea views. When the sun really gets a hold in April, the snowmobile trips become golden evening experiences, giving you the chance to wave to the local ice fishers and other snowmobile drivers out enjoying the light spring evenings.

Everyone is welcome on a snowmobile tour

Most people who go on the trips are Hurtigruten passengers who are making the most of the chance to travel overland between Køllefjord and Mehamn, but absolutely everyone is welcome. The speed is suitable for beginners, and everyone gets their own snowmobile. ‘Snowmobile School’ is the name of the short but thorough driving lesson and safety training that everyone gets beforehand. There is one guide for every six snowmobiles, so every question is answered promptly. And if you feel you have done enough driving, you can always sit behind the guide instead. The trip also takes place when Hurtigruten is on its southward voyage, from around 12:30 until 2:30 at night.

Nordkyn can offer bigger challenges to anyone who is used to driving a snowmobile, or anyone who is used to being outdoors. The tour operator Nordic Safari in Mehamn takes visitors on longer trips to the tiny settlements on the inner side of the Nordkyn peninsula, to the world’s northernmost mainland lighthouse at Slettnes, to the abandoned settlement of Skjøtningberg and across the flat plains of the centre of the peninsula, where you can really get some speed up. Daily distances covered are between 100 and 150 kilometres (60–95 miles).

Expeditions allow you to cross borders

The ultimate in snowmobile experiences is to take part in a snowmobile expedition. Nordic Safari offers tours that begin and end in Mehamn, but which go to Finland, Sweden and the Lyngen Alps near Tromsø. You stay overnight in cabins, mountain lodges and small tourist facilities, and cover distances of between 150 and 200 kilometres per day (95–125 miles). The season runs from February to May, when snow cover is guaranteed and it’s light enough to drive for many hours.

The Nordkyn Peninsula is the furthest north in Europe

The fishing villages of Kjøllefjord and Mehamn can be reached by Hurtigruten boat from Tromsø, Hammerfest and Honnningsvåg, before it sails on to Kirkenes. Widerøe also flies to Mehamn from Kirkenes, Alta and Tromsø, from where there are connections with SAS and Norwegian to Oslo and abroad. 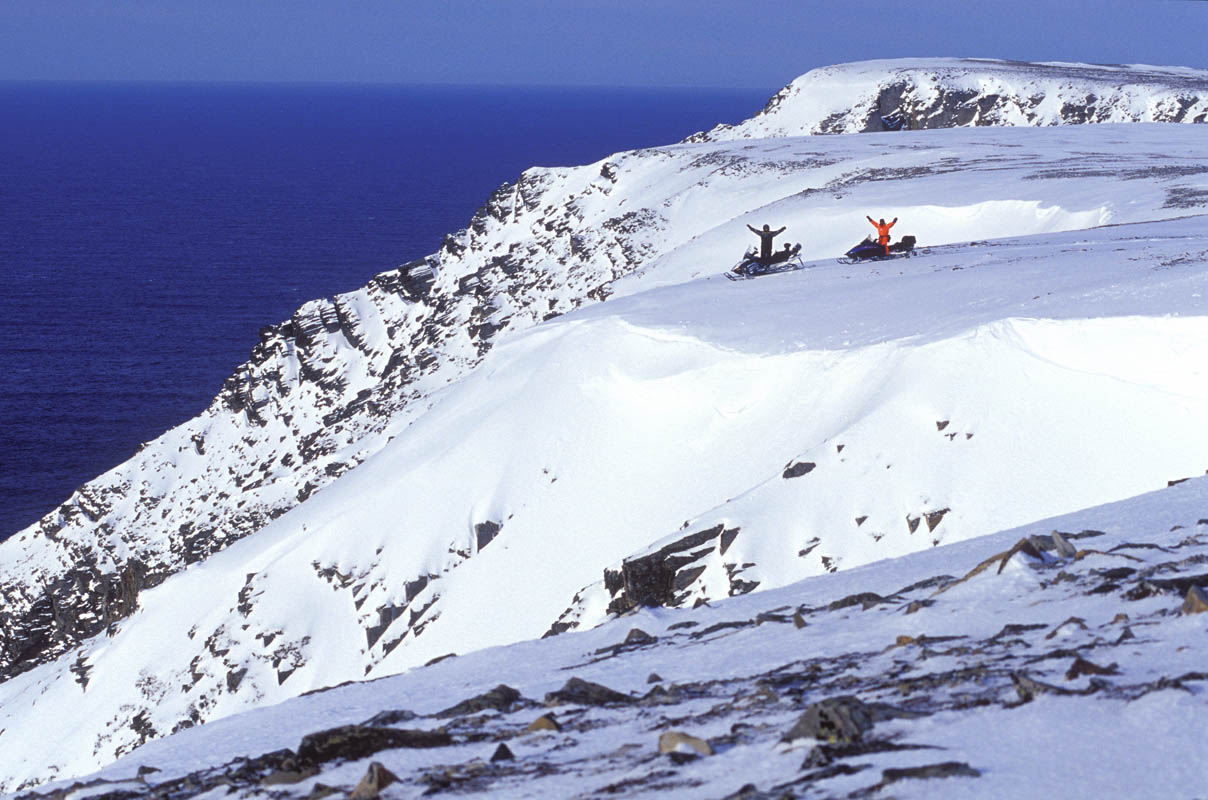 Ready to join a tour?

Visit Nordkynn can help you on your way to book the dream Arctic holiday experience. Have a great trip and remember your camera!