Ekkerøy is an Arctic Ocean community, with a lost fishing past

Ekkerøy is a charming place to relax in the far northeast of Norway. Visit Norway’s most accessible bird cliff and soak up the traditional coastal culture on the shores of the Arctic Ocean.

Ekkerøy is a delightful little fishing village in Varanger, in the far northeast of the country. A hundred years ago, there were nearly 300 inhabitants, but today the figure is less than 30. In the summer, the village once again becomes a hive of activity, as former residents return to stay in their erstwhile homes. The people of Vadsø often flock to Ekkerøy to swim and sunbathe when East Finnmark enjoys tropical temperatures under a Russian high-pressure weather system.

Fishing used to be the way of life on Ekkerøy

The Kjeldsen fish factory was traditionally the lifeblood of the village. There was both a shrimp factory and a facility for cleaning and preparing fish. The oldest part dates from 1911 and thus survived the Second World War, unlike most other fish factories across the region. The business closed its gates for the last time in 1969 and the site has now been restored as a reminder of the fishing industry in the area. In the summer, there are tours of the site, and coffee is served in the old general store. The village was first mentioned in records in 1567 and has been heavily influenced by Norwegian language and culture in an area which has strong sea Sami and Finnish roots.

While most settlements in Finnmark were razed to the ground, Ekkerøy was lucky enough to survive virtually untouched. In autumn 1944, the German front at Kirkenes was routed and the German army retreated rapidly all along the northern side of the Varangerfjord, hoping to reach the bottom of the fjord and the road westwards before the Russians got there. As a result, they did not have time to flatten Ekkerøy and only managed to smash a few windows. Today, because they have virtually all been refurbished, it is hard to believe just how old the houses are. However, a few retain their traditional appearance, giving an idea of what a typical coastal community along the Varangerfjord once looked like.

Fugleflåget, situated at the outer tip of the peninsula, is the most accessible bird cliff in Norway. All you have to do is park your car at the end of the road and walk for five minutes until you come to a steep cliff face. If you look down over the cliff, you will be able to see the bird cliff. Here, 15,000 pairs of kittiwakes breed in a cacophony of noise. Black guillemots, razorbills and cormorants can be seen too. Many birds can also be spotted elsewhere on the peninsula. In total, over 50 species have been observed on Ekkerøy. Waders such as oystercatchers, ringed plovers and purple sandpipers strut about on the beaches, while in the bogs, ruffs can be seen showing off. During years when rodents are plentiful, the snowy owl can even turn up. When all these summer guests come to their senses and fly south, the hardy high-arctic ducks head to Varanger from Eastern Siberia, and it is possible to watch the beautiful Steller’s eider and king eider as they enjoy the temperate waters of the Varangerfjord during the winter.

In 1941, the inhabitants of Ekkerøy suddenly found themselves on the front line, as Germany used Eastern Finnmark as a staging post from which to attack the Soviet Union. On the summit of Ekkerøya, two gun emplacements, named Gerda and Paula, were built, and a short railway line was constructed from a quarry on the island. These gun emplacements are still there today, in relatively good condition and clearly visible amongst the low vegetation. It is also possible to look inside the concrete bunkers. Immediately adjacent are a number of large, excavated hollows that were used to store ammunition. Elsewhere on the peninsula, you can also see the foundation walls of some German barracks. During the Second World War, more Germans than locals lived here at times. Many houses were requisitioned by the Germans and Ekkerøy became a densely populated place.

Although Ekkerøy is situated in the far north, the walking in the area is far from extreme. A 6 km (3.5 mile), marked trail leads all the way around the peninsula. On the way you can take in the bird cliff, the beautiful beaches and, on a clear day, the view out to the Rybachy Peninsula in Russia. The terrain is easy-going; there are very few hills and the heather and grass underfoot make for a soft and springy surface to walk on. However, you should make sure your boots are waterproof, as there are some boggy stretches. A short walk of 1.5 km (1 mile) leads up to the gun emplacements, and there are also some delightful beaches to stroll along.

Ekkerøy is Situated on the National Tourist Route

Ekkerøy is a natural place to stop on the National Tourist Route in Varanger, on the road from Vadsø to Vardø. A tour of the Kjeldsen fish factory followed by coffee and a waffle is, of course, compulsory. In the high summer, the Havhesten restaurant is also open, where you can have fish soup with king crab as well as reindeer meat. You can also rent one of the old houses and stay a few days in Ekkerøy

Ekkerøy is close to Vadsø

Ekkerøy is 15 minutes’ drive from Vadsø. Vadsø can be reached by bus, Hurtigruten or air, but the best way to get to Ekkerøy is to drive there in your own car. Ekkerøy is a natural place to stop on the National Tourist Route in Varanger. 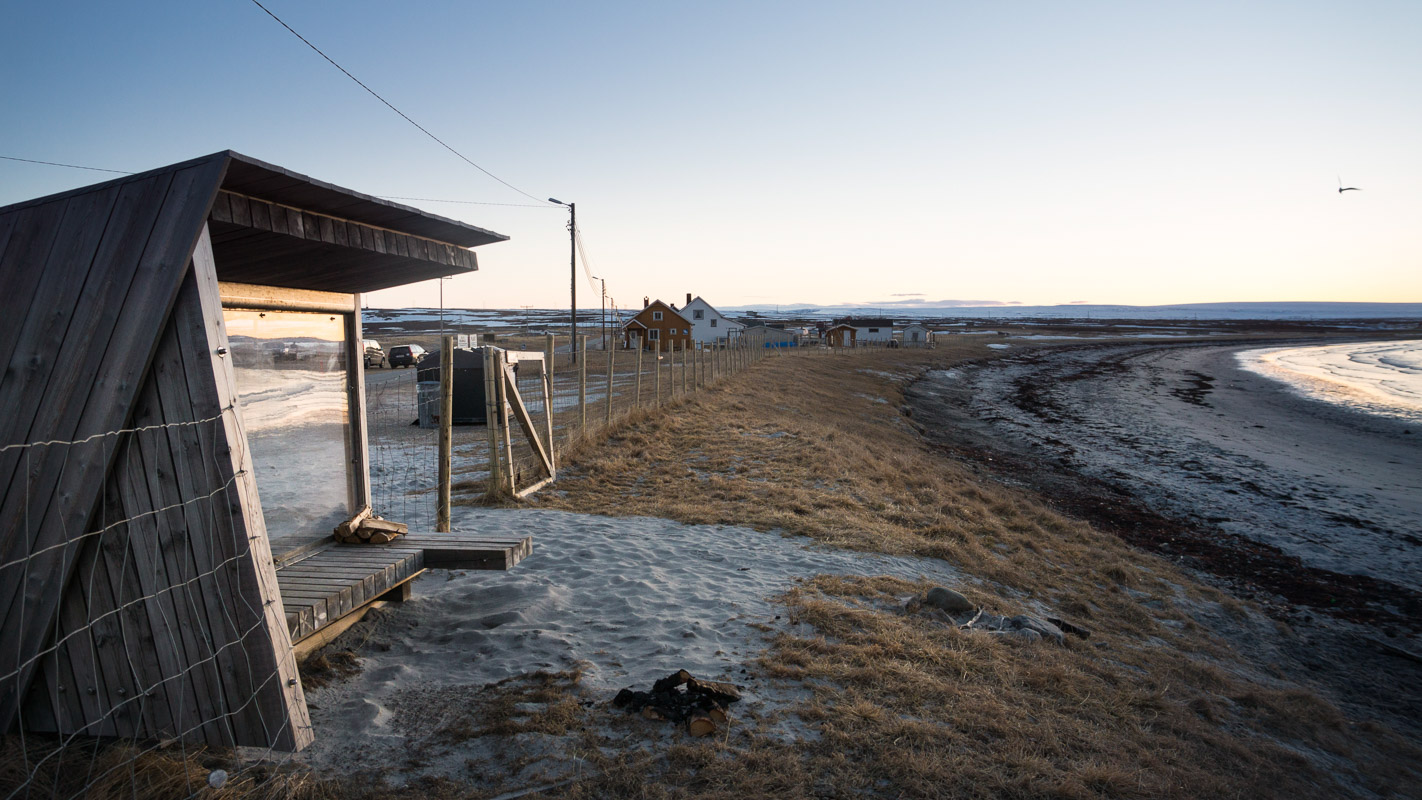 Here you can find more information.